Are you suffering from Information Overload Syndrome?

"Psychologist Dr David Lewis suggests that a new phenomenon, information fatigue syndrome, had emerged as a direct result of the information revolution. Symptoms might include the paralysis of the analytical capacity, constant searches for more information, increased anxiety and sleeplessness, as well as increasing self-doubt in decision-making."


The invention of the Printing Press a few hundred years ago made it possible to distribute written information to large amounts of people. However, it is only with the advent of modern computers that the ability to create, duplicate and access vast amounts of information has created Information Overload amongst the general population.

The root of the problem is that, although computer processing and memory is increasing all the time, the humans that must use the information are not getting any faster.

According to Lucy Jo Palladino, Ph.D, a psychologist and author of Find Your Focus Zone: An Effective New Plan to Defeat Distraction and Overload, “Information overload occurs when a person is exposed to more information than the brain can process at one time.”
According to neuroscientists, the more accurate term is “cognitive overload,” she said. Information or cognitive overload can lead to indecisiveness, bad decisions and stress, Palladino said. Indecisiveness or analysis paralysis occurs when you’re “overwhelmed by too many choices, your brain mildly freezes and by default, [and] you passively wait and see.”

Palladino suggests readers view incoming information as bringing bags of groceries into your home. “To put them away, you need time, an amount that’s limited to what fits on the counter, and an already clean fridge and organized pantry.” Palladino suggests:

Schedule breaks. Take a break away from the computer. This gives your brain a breather, and helps you regain perspective, she said. Plus, the quiet time can help you zero in on making a good decision.

Set limits. Because the Internet is available 24/7, you can consume information for hours. Limit how long you scan for information. Filter your sources, focusing only on the high-quality ones, she said 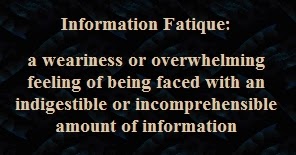 No wonder we find ourselves more tense, more anxious, more exhausted.
Symptoms of information fatigue syndrome include the following:
Not only are many of us expected to keep up with the latest technology but we are overloaded with information from multiple sources…such as:
In addition to Information Overload Syndrome researchers are also discovering the harmful results of:
Is There A Cure ?
Start small.
Limit your time on Facebook and other social media.
Use 'filtering' in your email software to automatically delete unwanted emails.
Unsubscribe to mailing lists which aren't necessary.
Limit your time reading on-line news.
Limit your time watching news on television.
You'll find yourself less stressed and more time to spend on the important things.
In no time, you'll be ready to take more aggressive steps to combat information overload.
Take a day off from television and radio.
Take a day off occasionally from being connected to any media and the internet, and set limits on your internet in terms of hours per day. These restrictions may sound scary for us web-addicted techno-humans, but it's absolutely imperative if we want to regain control of our energy levels, mental health, and life in general in an increasingly information-infused modern era.
Take a full day off from all media and electronic devices (including cell phones; this may be nearly impossible for some), and go out into nature and pursue outdoor interests. If you feel better, which you likely will, take a day off occasionally whenever you need one. If you'd rather a set schedule, take one day per week and set it aside as a internet-free day. If this is too often, make it bi-monthly. Pick a schedule that fits in with work or school. A key point being that even good things need to be used in moderation, including useful techo-goodies as the internet, Facebook, and Twitter updates.