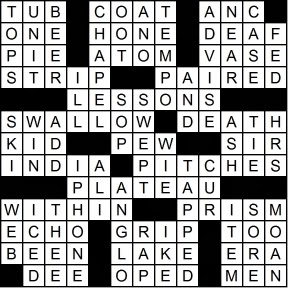 Crossword Puzzles are a relaxing way to keep the brain active.   Crossword puzzles are said to be the most popular and widespread word game in the world, yet have a short history. The first crosswords appeared in England during the 19th century. They were of an elementary kind, apparently derived from the word square, a group of words arranged so the letters read alike vertically and horizontally, and printed in children's puzzle books and various periodicals.

The term crossword first appeared in a dictionary in 1930.

More About The History of Crossword Puzzles

On December 21, 1913, Arthur Wynne, a journalist from Liverpool, England, published a "word-cross" puzzle in the New York World that embodied most of the features of the genre as we know it. This puzzle is frequently cited as the first crossword puzzle, and Wynne as the inventor. Later, the name of the puzzle was changed to "crossword".  (click here to read more about Arthur Wynne and crosswords.)

Crossword puzzles became a regular weekly feature in the World, and spread to other newspapers; the Boston Globe, for example, was publishing them at least as early as 1917.

By the 1920s, the crossword phenomenon was starting to attract notice. In 1921, the New York Public Library reported that "The latest craze to strike libraries is the crossword puzzle," and complained that when "the puzzle 'fans' swarm to the dictionaries and encyclopedias so as to drive away readers and students who need these books in their daily work, can there be any doubt of the Library's duty to protect its legitimate readers?"   In The New Yorker's first issue, released in 1925, the "Jottings About Town" section wrote, "Judging from the number of solvers in the subway and "L" trains, the crossword puzzle bids fair to become a fad with New Yorkers."

Initially, some viewed the crossword puzzle with alarm, and some expected (even hoped)[n that it would be a short-lived fad. In 1924, The New York Times complained of the "sinful waste in the utterly futile finding of words the letters of which will fit into a prearranged pattern, more or less complex. This is not a game at all, and it hardly can be called a sport... [solvers] get nothing out of it except a primitive form of mental exercise, and success or failure in any given attempt is equally irrelevant to mental development."  A clergyman called the working of crossword puzzles "the mark of a childish mentality" and said, "There is no use for persons to pretend that working one of the puzzles carries any intellectual value with it.".

In 1925, Time Magazine noted that nine Manhattan dailies and fourteen other big newspapers were carrying crosswords, and quoted opposing views as to whether "This crossword craze will positively end by June!" or "The crossword puzzle is here to stay!"  In 1925, the New York Times noted, with approval, a scathing critique of crosswords by The New Republic; but concluded that "Fortunately, the question of whether the puzzles are beneficial or harmful is in no urgent need of an answer. The craze evidently is dying out fast and in a few months it will be forgotten."  and in 1929 declared, "The cross-word puzzle, it seems, has gone the way of all fads...."  In 1930, a correspondent noted that "Together with The Times of London, yours is the only journal of prominence that has never succumbed to the lure of the cross-word puzzle" and said that "The craze—the fad—stage has passed, but there are still people numbering it to the millions who look for their daily cross-word puzzle as regularly as for the weather predictions."   The New York Times, however, was not to publish a crossword puzzle until 1942; today, the Times puzzle is one of the most popular in the country.
Email ThisBlogThis!Share to TwitterShare to FacebookShare to Pinterest
Newer Post Older Post Home