Rock Yourself To Sleep 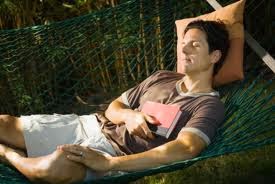 Nope....we're not talking about cranking up your old Iron Maiden album.

Think of the peaceful glide of a porch swing, sleeping on a boat, or the calming sway of a hammock nap. There’s a new fascinating study that suggests rocking does indeed have an effect on our ability to fall asleep as well as on the quality of the sleep itself.

Researchers at the University of Geneva, Switzerland tested the effects of rocking on sleep in a dozen adult men between the ages of 22-38. All the men involved were good sleepers—none were suffering from any sleep or anxiety disorders, and they were well rested at the time of the experiment. Researchers created a special bed that mimicked the rocking of a hammock, and had the men take two 45-minute naps. During one nap the bed gently rocked, and during the other nap the bed remained still. While their subjects slept, researchers measured brain activity using an electroencephalogram (EEG). Here’s what they found:
While rocking, sleepers showed significant increases in the types of brain-wave activity that are specifically associated with deeper, more restful, and more continuous sleep.

These findings regarding brain-wave activity are really fascinating. In Stage 2 sleep, a couple of important things happen:

Sleep spindles are a kind of noise barrier created by the brain: their presence seems tohelp us stay asleep when faced with noises and external stimulation that might otherwise wake us. People whose brains generate more sleep spindles seem better able to sleep through the kinds of noise and interruption that might otherwise wake us up, whether it’s a snoring bed partner or an ill-timed car alarm on the street.

Based on these results, the researchers suggest that the rocking motion has the effect of helping to synchronize the brain for sleep: both to fall asleep more quickly, and possibly to achieve longer periods of deeper, uninterrupted sleep.

There’s great potential in these results. I’d love to see the effects of rocking tested over longer sleep periods, and on subjects who suffer from sleep disorders, including insomnia. In many ways, of course, this study confirms what we all instinctively know about the power of this soothing, repetitive rocking motion. And you don’t need a custom hammock bed—or even the old-fashioned version in your backyard—to reap the benefits of rocking. Visualization is a powerful tool that requires no equipment, and you can try it tonight! 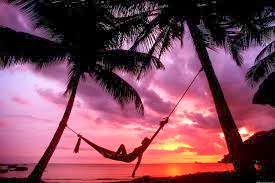 When you close your eyes for the night, create a restful rocking scene: imagine yourself swaying in that hammock, or floating lazily on a raft under gentle waves.
Use your senses: hear the waves beneath you, feel a light warm breeze, smell the salt water or freshly cut grass.
Try adding soothing music, if you find this relaxes you and quiets your mind.

You may be surprised at how easily you can create the powerful sensation of rocking yourself to sleep. And maybe you can sleep a little deeper and for a little longer, too.
Email ThisBlogThis!Share to TwitterShare to FacebookShare to Pinterest
Newer Post Older Post Home